3D
Scan The World
6,218 views 781 downloads
3 collections
Community Prints Add your picture
Be the first to share a picture of this printed object
1 comments

Ganesha is one of the best-known and most worshipped deities in the Hindu pantheon. His image is found throughout India, Sri Lanka and Nepal. Hindu worship him regardless of affiliations. Devotion to Ganesha is widely diffused and extends to Jains and Buddhists. Although he is known by many attributes, Ganesha's elephant head makes him easy to identify. Ganesha is widely revered as the remover of obstacles, the patron of arts and sciences and the devaof intellect and wisdom. As the god of beginnings, he is honoured at the start of rituals and ceremonies. Ganesha is also invoked as patron of letters and learning during writing sessions. Several texts relate mythological anecdotes associated with his birth and exploits and explain his distinct iconography. Ganesha emerged as a distinct deity in the 4th and 5th centuries CE, during the Gupta Period, although he inherited traits from Vedic and pre-Vedic precursors. He was formally included among the five primary deities of Smartism (a Hindu denomination) in the 9th century.

Ganesha is a popular figure in Indian art. Unlike those of some deities, representations of Ganesha show wide variations and distinct patterns changing over time. He may be portrayed standing, dancing, heroically taking action against demons, playing with his family as a boy, sitting down or on an elevated seat, or engaging in a range of contemporary situations. Ganesha images were prevalent in many parts of India by the 6th century. The 13th century statue pictured is typical of Ganesha statuary from 900–1200, after Ganesha had been well-established as an independent deity with his own sect. This example features some of Ganesha's common iconographic elements. Ganesha has the head of an elephant and a big belly. This statue has four arms, which is common in depictions of Ganesha. He holds his own broken tusk in his lower-right hand and holds a delicacy, which he samples with his trunk, in his lower-left hand. The motif of Ganesha turning his trunk sharply to his left to taste a sweet in his lower-left hand is a particularly archaic feature.  Ganesha typically holds an axe or a goad in one upper arm and a pasha (noose) in the other upper arm. In rare instances, he may be depicted with a human head.  In one modern form, the only variation from these old elements is that the lower-right hand does not hold the broken tusk but is turned towards the viewer in a gesture of protection or fearlessness (abhaya mudra). The same combination of four arms and attributes occurs in statues of Ganesha dancing, which is a very popular theme.

A nice simple print, but lots of detail, so slow... 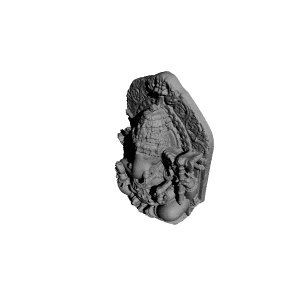 ×
3 collections where you can find Ganesha at The Asian Art Museum, San Francisco by Scan The World