3D
360°
Scan The World
2,924 views 304 downloads
Community Prints Add your picture
Be the first to share a picture of this printed object
0 comments

One of the most popular of all Hindu deities, Ganesha is the elephant-headed god. He is the destroyer of obstacles and regarded as auspicious. Hindus invoke his help at the beginning of any enterprise, from weddings to the opening of a new business. They invoke the god to smooth the way, remove distractions, and protect them from evil. He also is the giver of earthly prosperity and well-being. In this classic tenth-century Javanese depiction, from the island of Java, Ganesha sits erect on a double lotus base. Pot bellied and with his chubby feet held tightly together, he eats sweetmeats from a bowl in his lower left hand. His headdress, made of braided locks, bears a protective crescent moon and skull. His lower right hand grasps a broken tusk, while his upper right hand holds a rosary topped with a pomegranate, a symbol of abundance. In his upper left hand, he displays a battle-axe used to counter evil. Ganesha images often decorated the principal niche in the western wall of a Shiva temple. 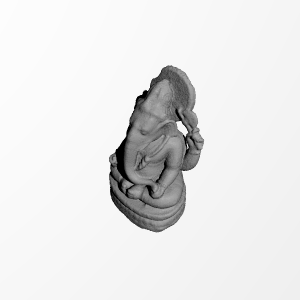 ×
0 collections where you can find Ganesha by artsMIA