Ganymede and The Eagle

3D
Scan The World
3,512 views 335 downloads
1 collection
Community Prints Add your picture
Be the first to share a picture of this printed object
0 comments

Ganymede and The Eagle

The contour features strongly as a design element in the figure of Ganymede. After various versions in which he presented the standing figures of Ganymede Offering the Drinking Cup (1804) and Ganymede Filling the Cup (1816), the work of 1817 shows him as a kneeling figure watering the eagle. The ancient tale tells how Ganymede, son of King Tros (who gave Troy its name), was the most beautiful of all youths Ganymede is chosen by the gods as Zeus' cupbearer. Fired with great lust, the father of the gods clothes himself in eagle feathers and hunts out the youth on the Plain of Troy in order to lure him away to Olympus. Ganymede artlessly offers his drinking bowl to this eagle that drops from the sky, and the disguised supreme Olympic god dips his beak into the bowl. As a sign of his origin, the youth wears the Phrygian cap and holds a jug in his right hand.

Wholly designed for a single viewpoint, the sculpture is basically held together by its sever outline. This brings out the relief-like nature of the group and is a mark of Thorvaldsen's supreme mastery of line, which he had practiced to perfection in numerous bas-reliefs of the time. 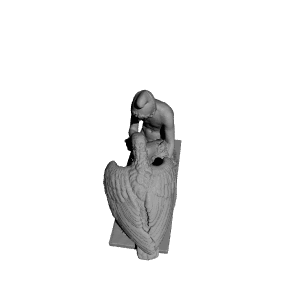 ×
1 collections where you can find Ganymede and The Eagle by geoffrey.marchal