3D
Scan The World
2,405 views 149 downloads
2 collections
Community Prints Add your picture
Be the first to share a picture of this printed object
0 comments

Ganymede was a handsome Trojan prince who was carried off to heaven by Zeus in the shape of an eagle where he was appointed as cup-bearer of the gods. Ganymedes was also placed amongst the stars as the constellation Aquarius, his ambrosial mixing cup as Crater, and the eagle as Aquila. Ganymedes was often portrayed as the god of homosexual love and as such appears as a playmate of the love-gods Eros (Love) and Hymenaios (Hymenaeus) (Marital Love). 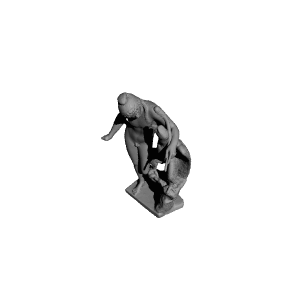