3D
Featured
7,219 views 280 downloads
1 collection
Community Prints Add your picture
Be the first to share a picture of this printed object
0 comments

Suppport me on Patreon here https://www.patreon.com/lilykill, and help me create and get access to more great models.

As most people with dogs would know that now and then, something will get chewed. Recently, my dogs decided my water gun for the garden was on the menu and as you can see from the first images, there wasn't much left after they finished.

So, with the help of this competition and the trials of AutoDesk Remake and Fusion 360 was I was able to recreate and improve the handle off the original. The original handle was a single piece injection molded part and was a single curved handle that when wet made it easy to twist in your hand when using it. Using Remake, I took approximately took 80 odd photos to capture the part which came out quite well was shown in images in the photo reel. Remake allowed me to cut out the mesh around the cracked and missing piece on one side and recreate it using the tools provided. I was also able to thicken certain sections of the mesh to stop thin wall sections occuring while printing the model and reducing the parts strength.

Once the mesh was processed and made manifold I then imported it into Fusion 360 to start creating an improved handle. I made it the approximaitly the width of my hand but made it more square so it stops the water gun twisting in your handle and make it easier to printing. I also added a small pattern of ribs on the outside to help gripping the handle. To give the part extra stiffness and not to rely a on dense infill I added internal stiffeners on the inside of the handle. Once the model was complete I then exported the STL and printed the new handle and fitted it to the old water gun with minimal adjustment needed. Now it works better than the original and does not require to replace the entire part. 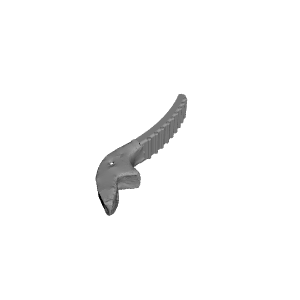