3D
Scan The World
10,411 views 1,954 downloads
11 collections
Community Prints Add your picture
Be the first to share a picture of this printed object
0 comments

In Western tradition, the dragon was combined with the already standardised Passio Georgii in the second half of the 13th century, first in Vincent of Beauvais' encyclopedic Speculum Historiale and Jacobus de Voragine's Golden Legend (1260s), rising to great popularity as a literary and pictorial subject in the Late Middle Ages. The legend gradually became part of the Christian traditions relating to Saint George and was used in many festivals thereafter. 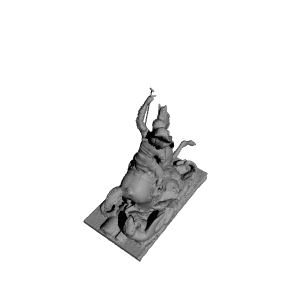