3D
Scan The World
2,757 views 74 downloads
Community Prints Add your picture
Be the first to share a picture of this printed object
0 comments

George Graville Leveson-Gower was the 1st Duke of Sutherland (1758-1833). It was sculpted by Sir Francis Leggatt Chantrey (1781-1841) out of marble and was signed and dated 1830. A politician, art patron and landowner, Sutherland was nicknamed the 'leviathan of wealth'. His investments included the Bridgewater Canal and a one-fifth stake in the Manchester and Liverpool Railway. He was also a benefactor of the National Gallery and President of the British Institution, for which the first version of this busy was commissioned, by Lord Farnborough, in 1828. This example of 1830 was for Sutherland's wife. Although Chantrey charged the reduced price of £157, the bill was not settled during his lifetime. 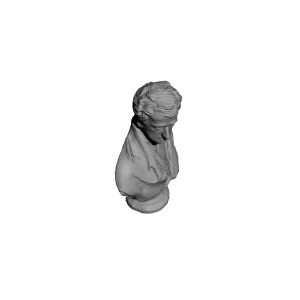 ×
0 collections where you can find George Granville at The National Portrait Gallery, London by Scan The World