3D
Scan The World
2,512 views 106 downloads
Community Prints Add your picture
Be the first to share a picture of this printed object
0 comments

George Granville Leveson-Gower, 1st Duke of Sutherland (9 January 1758 – 19 July 1833), known as Viscount Trentham from 1758 to 1786, as Earl Gower from 1786 to 1803 and as The Marquess of Stafford from 1803 to 1833, was a British politician, diplomat, landowner and patron of the arts from the Leveson-Gower family. He is estimated to have been the wealthiest man of the 19th-century. He remains a controversial figure for his role in the Highland Clearances.

Sutherland sat as Member of Parliament for Newcastle-under-Lyme from 1779 to 1784 and for Staffordshire from 1787 to 1799. The latter year he was summoned to the House of Lords through a writ of acceleration in his father's junior title of Baron Gower. Between 1790 and 1792 he was Ambassador to France, despite not having any previous diplomatic experience. The embassy was withdrawn in August 1792 after the imprisonment of the royal family during the French Revolution. After his return to Britain he declined the posts of Lord Steward of the Household and Lord-Lieutenant of Ireland. However, in 1799 he accepted the office of joint Postmaster General, which he retained until 1801. Sutherland played an important part in the downfall of Henry Addington's administration in 1804, after which he changed political allegiance from the Tory to the Whig party. After 1807 he played little part in politics, although late in life he supported Catholic Emancipation and the 1832 Reform Act.

The Leveson-Gower family owned extensive lands in Staffordshire, Shropshire and Yorkshire. In 1803 Sutherland also succeeded to the vast estates of his maternal uncle Francis Egerton, 3rd Duke of Bridgewater, which included the Bridgewater Canal and a major art collection including much of the Orleans Collection; both Gower and his uncle had been members of the consortium which brought it to London for dispersal. According to the will of the Duke of Bridgewater, these passed on the death of the first Duke of Sutherland to his third son Lord Francis Leveson-Gower (see below). This inheritance and his marriage to Elizabeth Sutherland, 19th Countess of Sutherland, who owned most of Sutherland, brought him great wealth. Sutherland is estimated to have been the wealthiest man of the 19th-century, surpassing even Nathan Rothschild. The precise value of his estate at death is unknown, as it was simply classed as 'upper value'. He was described by Charles Greville as a "leviathan of wealth" and "...the richest individual who ever died".

Sutherland and his wife remain controversial figures for their role in carrying out the Highland Clearances, where thousands of tenants were forced out of their homes. The clearances, described by some commentators as a form of ethnic cleansing, were undertaken between 1811 and 1820. In 1811 parliament passed a bill granting half the expenses of building roads in northern Scotland, on the provision that landowners paid for the other half. The following year Sutherland commenced building roads and bridges in the county, which up to that point had been virtually non-existent. Appalled by the poor living conditions of his tenants and influenced by social and economic theories of the day as well as consulting widely on the subject, he became convinced that subsistence farming in the interior of Sutherland could not be sustained in the long-term. At first the clearances involved relocations from Assynt to coastal villages on the assumption that farmers could take up fishing. However, when the consequences of these actions became clear, the evictions were met with opposition, which was ruthlessly repressed. Resentment mounted when one of Sutherland's factors, Patrick Sellar, was acquitted of murder and then took over one of the massive sheep farms the evictions created. Condemnation was widespread and the Highlanders' grievances were heard in the British House of Commons. However, little was done in practice to prevent the emptying of the glens.

In 1837 a large monument, known locally as the Mannie, was erected on Ben Bhraggie near Golspie to commemorate the Duke's life. The existence of this statue has been the subject of some controversy—in 1994, Sandy Lindsay, a former Scottish National Party councillor from Inverness proposed its demolition. He later altered his plan, asking permission from the local council to relocate the statue and replace it with plaques telling the story of the Clearances. Lindsay proposed moving the statue to the grounds of Dunrobin Castle, after the J. Paul Getty Museum in Los Angeles declined his offer to take it. As of January 2013, however, the statue still stands. 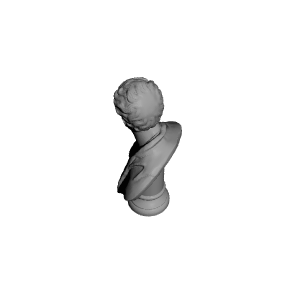 ×
0 collections where you can find George Granville Leveson-Gower, 1st Duke of Sutherland by Scan The World