3D
Scan The World
3,003 views 136 downloads
2 collections
Community Prints Add your picture
Be the first to share a picture of this printed object
0 comments

George John Whyte-Welville (1821-1878) was a Novelist and poet; after an army career, including service in the Crimean War, he led the life of a country gentleman whose chief enthusiasms were writing and field sports. He published over twenty novels, drawing in particular on his military and sporting experiences. He was an acknowledged arbiter of hunting practice and attire, he died when his horse fell while fox hunting. This marble bust, incised and dated 1879, was sculpted by Sir Joseph Edgar Boehm (1834-1890) 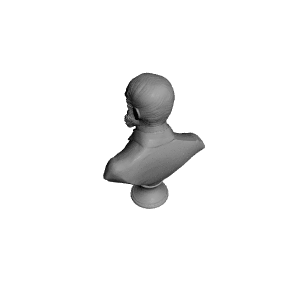 ×
2 collections where you can find George John White-Melville at The National Portrait Gallery, London by Scan The World