Rodin had visited England in 1881 at the invitation of the French painter and etcher, Alphonse Legros and this marked the start of a very successful career in England where he met a number of London's leading personalities. George Wyndham (1863-1913) had a distinguished military career, was also a writer, and was widely admired for his elegance. He was Secretary of State for War and then Chief Secretary for Ireland 1900-1905. Rodin was introduced to him by the poet and critic William E. Henley, friend of the sculptor John Tweed, one of his most stalwart supporters in England.
In 1901 Rodin is known to have shown Wyndham around his studio and in 1902 George Wyndham presided over the banquet at the Café Royal in London to celebrate the presentation of the cast of St John the Baptist to V&A. Later, in 1912, Rodin appealed to Wyndham to support the way he wished The Burghers of Calais to be displayed in London.

For this bust, Rodin was to go to Ireland, but in the end it was Wyndham who went to Meudon. Sittings began in 1804 and were greatly enjoyed by Wyndham who wrote to his sister, 'We have run over the whole Universe lightly but deeply'. When Wyndham saw the finished plaster, he was delighted and remarked: 'It is indeed a portrait, one of the most striking. It is so true and living that looking at the throat one expects to see the bust swallow. But it is more than that, a lot more. It is a man at 40 years of age…in mid career, with his regrets, his worries, his force, his hopes, his dash'. 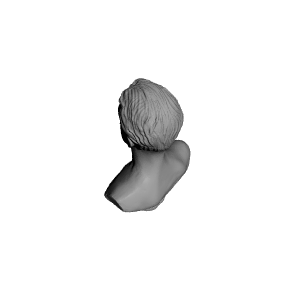 From my Rodin Collection of prints. I always wondered how sculpts would look like if painted. This started when I was told that the sculpts in the metope of Parthenon where painted and what remains today is the decoloured marble after many ages.