3D
Scan The World
3,427 views 131 downloads
Community Prints Add your picture
Be the first to share a picture of this printed object
0 comments

{Engraved on the front of the granite plinth:}
George Peabody MDCCCLXIX

{On a bronze plaque attached below:}
Born Danvers, Mass, U.S.A. 18th February 1795. Died London England 4th November 1869. American philanthropist and great benefactor of the London poor. Accorded the honorary freedom of the City of London 10th July 1862. This statue by W. W. Story was unveiled on the 23rd July 1869.
{On the base of the statue:}
Ferd. v. Miller fudit, Munchen 1869.
Unveiled by the then Prince of Wales, unusually in the subject's lifetime.  Too ill to attend the ceremony Peabody died 3 months later.
This object is part of "Scan The World". Scan the World is a non-profit initiative introduced by MyMiniFactory, through which we are creating a digital archive of fully 3D printable sculptures, artworks and landmarks from across the globe for the public to access for free. Scan the World is an open source, community effort, if you have interesting items around you and would like to contribute, email stw@myminifactory.com to find out how you can help.
Show more Show less
License
Printing Details 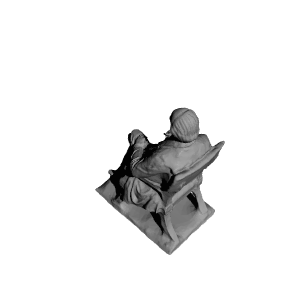 ×
0 collections where you can find Georges Peabody, Royal Exchange, London by Scan The World