This German luger was confiscated from the commander of a surrendering Nazi unit by General William Collier. It was provided for scanning by his great grandneice, Virginia Commonwealth University alumnae Carson Collier. In addition to fighting in World War II, General Collier also served in World War I and the Korean War.

The Pistole Parabellum 1908—or Parabellum-Pistole (Pistol Parabellum)[2]—is a toggle-locked recoil-operated semi-automatic pistol. The design was patented by Georg J. Luger in 1898 and produced by German arms manufacturer Deutsche Waffen- und Munitionsfabriken (DWM) starting in 1900 with other manufacturers such as W+F Bern, Krieghoff, Simson, Mauser, and Vickers;[3] it was an evolution of the 1893 Hugo Borchardt–designed C-93. The first Parabellum pistol was adopted by the Swiss army in May 1900. In German Army service, it was succeeded and partly replaced by the Walther P38 in caliber 9×19mm Parabellum. 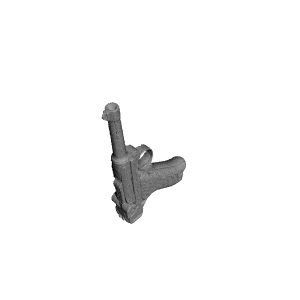 65% printed at 0.15 layer height. Printed in two halves (sunk model through build plate) and glued together. Painted with Scale 75 Colour.