3D
Scan The World
1,637 views 75 downloads
Community Prints Add your picture
Be the first to share a picture of this printed object
0 comments

Germanicus, also called Germanicus Julius Caesar, original name Nero Claudius Drusus Germanicus, (born May 24, 16 or 15 BCE—died October 10, 19 CE, Antioch, Syria [now Antakya, Turkey]), was the nephew and adopted son of the Roman emperor Tiberius (reigned 14–37 CE). He was a successful and immensely popular general who, had it not been for his premature death, would have become emperor.

The styling of the strands of the fringe, similar to that of his uncle but facing the other way, designates Germanicus as the successor of Tiberius. 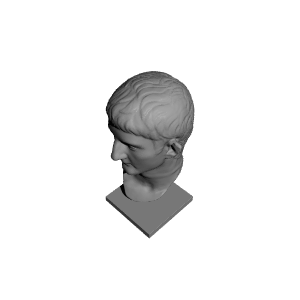 ×
0 collections where you can find Germanicus by Musée Saint-Raymond