3D
Scan The World
4,206 views 665 downloads
7 collections
Community Prints Add your picture
Be the first to share a picture of this printed object
0 comments

host crabs are semiterrestrial crabs of the subfamily Ocypodinae. They are common shore crabs in tropical and subtropical regions throughout the world, inhabiting deep burrows in the intertidal zone. They are generalist scavengers and predators of small animals. The name "ghost crab" derives from their nocturnality and their generally pale coloration. They are also sometimes called sand crabs, though the name refers tovarious other crabs that do not belong to the subfamily.

Characteristics of the subfamily include one claw being larger than the other, thick and elongated eyestalks, and a box-like body. The differences in claw sizes, however, are not as marked as in male fiddler crabs. The subfamily includes 22 species in two genera. 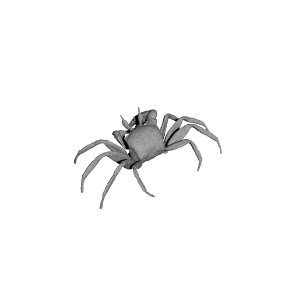 ×
7 collections where you can find Ghost Crab by Threedscans