3D
360°
Featured Scan The World
1,852 views 200 downloads
1 collection
Community Prints Add your picture
Be the first to share a picture of this printed object
0 comments

Giovanni or Gian Battista Sommariva (died 6 January 1826, Milan) was an Italian politician in the Cisalpine Republic and the Second French Republic, as well as a notable arts patron.

Sommariva commissioned a couple of busts to Thorvaldsen but was often a critic on his work, proving their relationship to be turbulent. In archival letters, Sommariva complained about another commission of 'Alexander the Great's Entry into Babylon', and Thorvaldsen claimed that he had a poor judge of art. 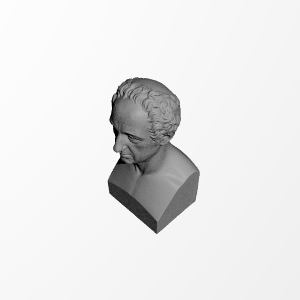 ×
1 collections where you can find Giovanni Battista Sommariva by Thorvaldsen