3D
Scan The World
4,125 views 166 downloads
Community Prints Add your picture
Be the first to share a picture of this printed object
0 comments

This bust is a portrait of Giovanni Chellini, who died in 1462 at the age of 83 or 84. An inscription within the hollow base of the bust identifies both sitter and artist: MAGisteR IOHANES MAGistRI . ANTONII DE SancTO MINIATE DOCTOR ARTIVM ET MEDICINE . MCCCCLVI. In the centre are the words: OPUS ANTONII.

Giovanni Chellini da San Miniato (d. 1462) was well-known in Florence as a doctor and teacher of medicine. The present bust was probably based on a mask cast from the doctor's face a few years prior to his death.

The bust was presumably commissioned by Chellini himself, and stayed in his family until it was sold in Florence in the second half of the nineteenth century. Chellini treated the sculptor Donatello for an illness, and in payment Donatello gave him a bronze roundel of the Virgin and Child in 1456, which is now also in the V&A collection and displayed nearby to the bust.

This sculpture is one of the earliest and finest Renaissance portrait busts and is the earliest known work by Rossellino. It epitomises both his mastery of carving and the taste for life-like portrait busts that developed in Florence around this time. Made six years before the sitter died, the extraordinary handling and particular features of the bust indicate that it is based on a life-mask. A plaster mould was taken of the sitter's face, which would faithfully record his or her features. During the process, a band was placed around the sitter's head to protect the hair, and in the process the ears would be pinned back. However, this feature would not have been directly translated into an image cast from the mould, and in any event need not have been translated into the carved marble. To ensure his own fame and that of the sitter, Rossellini signed it underneath. 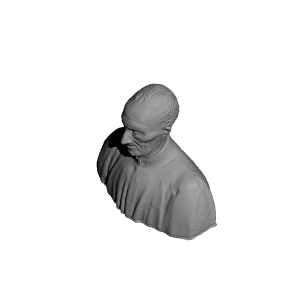 ×
0 collections where you can find Giovanni Chellini by vam