3D
360°
Featured Scan The World
1,894 views 151 downloads
3 collections
Community Prints Add your picture
Be the first to share a picture of this printed object
0 comments

Giovanni de' Medici (1421-1463) was the son of Cosimo Il Vecchio (the Elder) and the younger brother of Piero de' Medici. The brothers were pivotal figures in Florentine and Italian history in the middle of the fifteenth century, not only because their activities in the economic, political, and diplomatic spheres, but also owing to their role in cultural and artistic life.

Mino da Fiesole's marble busts of the brothers from about 1453 and 1455, respectively, are almost startling innovations, generated by the brothers' love of classical literature and their collecting of ancient coins and sculpture. Resonant as they were with the prestige of ancient precedent, independent, secular busts of living people were nonetheless a modern novelty.

Both sculptures were eventually over doors in the Palazzo Medici, but they date before its completion in 1459, and were not conceived as pendants. 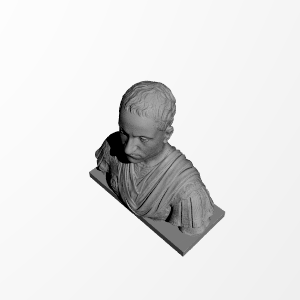