3D
Scan The World
4,355 views 427 downloads
8 collections
Community Prints Add your picture
Be the first to share a picture of this printed object
0 comments

The giraffe, Giraffa camelopardalis, is the tallest living terrestrial animal, and is found most commonly in the semi-arid areas of dry savannahs and open woodlands of Africa, south of the Sahara. Historically, the range of giraffes also extended into northern Africa (Dagg, 1971). The characteristic elongate neck is not developed by adding vertebrae but by extending the length of the seven vertebrae that are typically found in mammals (although there is evidence for one additional vertebra in the neck of the giraffe; Solounias, 1999). Their long neck and legs (along with their prehensile lips and elongate tongue) aid the giraffe in feeding on tall acacia and mimosa trees (Nowak, 1999).

Giraffa is allocated to Giraffidae, which also includes the extant okapi. The skull of the giraffids is unique in that the horns develop differently than those found in other groups. The bony horn ossifies separately from the skull and the two fuse together later in development. The fossil record of giraffids extends back into the early Miocene of Africa, and they were found in Europe and Asia from the middle Miocene through the Pleistocene (Nowak, 1999:1084-1089). 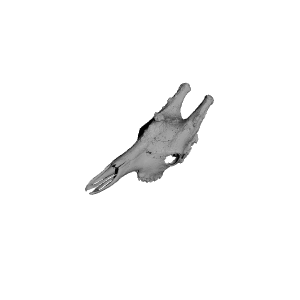 ×
8 collections where you can find Giraffa camelopardalis, Giraffe by Digimorph