3D
360°
Scan The World
2,451 views 141 downloads
1 collection
Community Prints Add your picture
Be the first to share a picture of this printed object
0 comments

This sculpture depicts the body of a woman, lounged against a rock, carved in alabaster.

Vladimir Domogatsky was a teacher and professor of the Moscow State Art Institute, and an honoured member of the Russian Soviet Federative Socialist Republic. Born into the family of a wealthy doctor and landowner, he spent much of his childhood living in Switzerland. He later studied at Moscow University and took on private lessons in sculpture from SM Volnukhin and the painter S. V. Ivanov.

He travelled Europe, studying in multiple locations such as Paris and Italy, learning European art and techniques, such as working in marble.

He returned to Russia after studying, teaching in the Stroganov School in Moscow. He then became a professor of the Moscow Institute of Fine Arts, later becoming Dean of the Faculty of Sculpture. His students included other prominent Soviet sculptors such as Lev Kerbel, Vladimir Tsigal, and D. Mitlyansky. As he taught, he continued to work in the areas of animal and portrait sculpture. 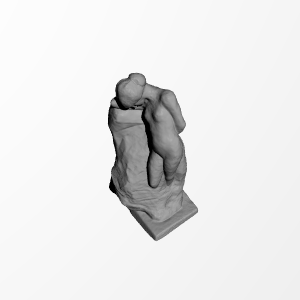 ×
1 collections where you can find Girl by Scan The World