3D
Scan The World
3,775 views 243 downloads
3 collections
Community Prints Add your picture
Be the first to share a picture of this printed object
0 comments

Facing the half-timbered house of the Tourist Office, sitting on a basket, "The girl with the shell" radiates by its natural grace and its luminous smile. The sculptor, a resident of the Villa Medici, had made himself known to the public by his second-year shipment: "The fisherman with the shell". His sculpture met a great success and was acquired by the Emperor Napoleon III. In this work, he pays homage to the "Fisherman Neapolitan" of his professor François Rude. In 1863 he wrote in his correspondence: "I am the counterpart of my" Fisherman in the Shell ", a girl by the sea sewing a shell on her head. In these two works, the artist is not unaware of the symbolism of the shell, attribute of Venus and symbol of sensual love. The plaster will be exhibited at the Salon of 1864 and the marble will be acquired by the Empress Eugénie in the salon of 1867. A patinated plaster, signed and dated 1867, is in the city museum and a sketch in terracotta where the The young girl still wears her hands on her head. Previous works such as the sculptured composition of the Louvre's "antique crouched Venus" and the portrait he made of Anna Foucart, the daughter of his friend and patron Jean-Baptiste Foucart, served Carpeaux for the realization of his work 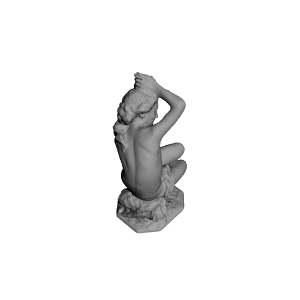