3D
Scan The World
2,635 views 110 downloads
2 collections
Community Prints Add your picture
Be the first to share a picture of this printed object
0 comments

the Art of the famous artists who worked in Italy, Russia, France and America, shown in the solo exhibition for many will be a real discovery. In the Museum, which predominantly works the most fruitful of the "Russian" period, near the portraits of prominent contemporaries (L. N. Tolstoy, Witte, I. I. Levitan, Chaliapin, S. S. Botkin) will be shown genre and animal work, as well as graphics Trubetskoy. Part of the exhibition consists of 37 sculptures and 8 drawings from the collections of the Russian Museum, the Tretyakov gallery, the Hermitage, St.-Петербургского Museum of theatrical and musical art Moscow and private collections.

Prince Paolo Petrovich Troubetzkoy (also known as Pavel or Paul; Russian: Павел Петрович Трубецкой, translit. Pavel Petrovich Trubetskoy; Intra, Italy, 15 February 1866 — Pallanza, 12 February 1938) was an artist and a sculptor who was described by G.B. Shaw as "the most astonishing sculptor of modern times".He is the son of Russian diplomat Prince Peter Petrovich Troubetzkoy. He worked in Russia, America, England and Italy. He was a self-taught artist, although he learned sculpture from Giuseppe Grandi. He is associated with impressionism, due to his ability to grasp sketchy movements in his bronze works. He was heavily influenced by the work of Auguste Rodin and Medardo Rosso. He depicted the society of the Belle Époque. Few of his bronzes are still available in the market. Quite famous is the 35 cm high portrait of Constance Stewart-Richardson called "The Dancer".

The largest and best known of his works is the monumental equestrian statueof the Russian Tsar Alexander III in St. Petersburg, Russia. The monument was opened in 1909 on the Nevsky Prospekt near the Moskovsky Vokzal terminal. After the Russian revolution of 1917, the Soviet government removed the monument from the main street to the backyard of the Russian Museum in St. Petersburg. After the collapse of the Soviet Union, in 1994, the monument to Tsar Alexander III was placed in front of the Marble Palace near the embankment of the Neva river, at the former site of the armoured car that transported Lenin from Finland Station. 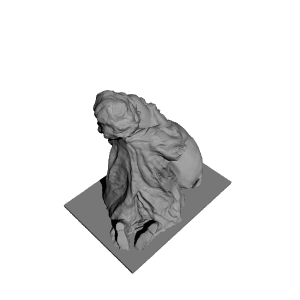