3D
Scan The World
2,796 views 65 downloads
Community Prints Add your picture
Be the first to share a picture of this printed object
0 comments

Giuseppe Giusti (12 May 1809 – 31 May 1850) was an Italian poet and satirist. In 1834, Giusti, having at last earned a degree legal profession, left Pisa to go to Florence, nominally to practice with the advocate Capoquadri, but once there, he set out to enjoy life in the then-capital of Italy, Tuscany, where he devoted himself to literary interests.

He fell seriously in love a second time. As before, he was abandoned by his love. It was then he wrote his finest verses. Although his poetry was not yet collected in a volume, for some years it passed from hand to hand, as was often the custom, and his name gradually became famous. The greater part of his poems were published clandestinely at Lugano, at no little risk, as the work was destined to undermine the Austrian rule in Italy.

After the publication of a volume of verses at Bastia, Giusti thoroughly established his fame by his Gingillino, the best in moral tone as well as the most vigorous and effective of his poems. The poet sets himself to represent the vileness of the treasury officials, and the base means they used to conceal the necessities of the state. The Gingillino has all the character of a classic satire. When first issued in Tuscany, it struck all as too impassioned and personal. Giusti entered heart and soul into the political movements of 1847 and 1848, served in the national guard, sat in the parliament for Tuscany; but finding that there was more talk than action, that to the tyranny of princes had succeeded the tyranny ofdemagogues, he began to fear, and to express the fear, that for Italy evil rather than good had resulted. He fell, in consequence, from the high position. he had held in public estimation, and in 1848 was regarded as a reactionary. His friendship for the marquis Gino Capponi, who had taken him into his house during the last years of his life, and who published after Giusti's death a volume of illustrated proverbs, was enough to compromise him in the eyes of such men as Guerrazzi, Montanelli and Niccolini. On 31 May 1850 he died at Florence in the palace of his friend.

Printed for PRINT3Dforum.com Just some support at the neck area and it will be fine. 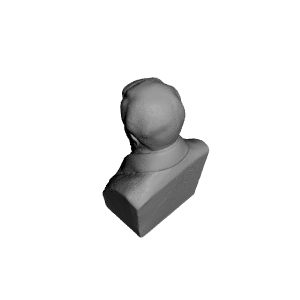 ×
0 collections where you can find Giuseppe Giusti at The Borghese Gardens, Rome by Scan The World