3D
360°
Scan The World
1,583 views 104 downloads
3 collections
Community Prints Add your picture
Be the first to share a picture of this printed object
0 comments

Antonio Canova is considered one of the main exponents of the aesthetic ideals of neoclassicism. Commissioned to create this work because of his integral connections with the city of Padua, the relief is a fairly unknown gem of Canova's still exposited today at The Museu Civici Eremitani.

For all of its simplicity, the work conceals a lively past. Not only for what it represents but also the complicated story behind the object is what makes it such a fascinating work.

On the 21st December 1795 the scholar Giovanni Scardova dedicated a small street in the San Gregorio district of Padua to Giralomo Giustiniani, a deputy Venetian mayor. Canova was commissioned to create a gift for Padua which was meant to be representative of it as a city. During its creation, in 1797 the French entered Italy. On May 12 the last Doge of Venice - Ludovico Manin - abdicated, decreeing the of the republic. Canova was instructed to suspend the inscription dedicated to Giustiniani. In the early 1800s, the French seized the relief and Canova was instructed,

"In the democratic era, the Padovans are asked to remoe the portrait of Giustiniani from their Bass-relief, replacing that of Bonaparte".

Canova couldn't decline, creating a new drawing for the dedication of a woman, an inscription reading "NAPOLEON ME AVSPICAT"

It took some time for the Pro-Napoleonic relief to be rediscovered. In 1802, the noble Antonio Conte Zacco-Lion became the spokesman for those Paduans who wanted to bring the work back to Padua. It was in this time that the inscription was replaced in honour of Giustiniani's unle, Nicolo, who was bishop of Padua and founder of the city's hospital. When the relief finally arrived back in Padova in October 1803, the inscription on the work was agreed to be:

More can be read about the sculpture here 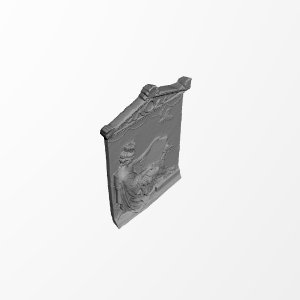