3D
Scan The World
4,634 views 229 downloads
3 collections
Community Prints Add your picture
Be the first to share a picture of this printed object
0 comments

Representations of the goddess Durga killing the buffalo demon are celebrated throughout India. Transmitted to Southeast Asia, the theme appears in Indonesian art and in the early sculpture of Thailand and Cambodia. When the gods were defeated by the lord of the demons, Mahisha, they pleaded with Durga, the incarnation of female energy, to defend the universe. Having been given a weapon by each of the gods and thus possessing all of their powers, she defeated first the demon's armies and then Mahisha himself, who had taken the form of a buffalo.
In this sculpture, Durga stands on the corpse of the vanquished beast. The demon, having already left it, kneels behind its head and prays to the goddess for mercy. Despite the loss of the heads of Durga and the demon and the partial restoration of the breasts, this unusually large sculpture remains one of the most imposing images of this theme.

This object is part of "Scan The World". Scan the World is a non-profit initiative introduced by MyMiniFactory, through which we are creating a digital archive of fully 3D printable sculptures, artworks and landmarks from across the globe for the public to access for free. Scan the World is an open source, community effort, if you have interesting items around you and would like to contribute, email stw@myminifactory.com to find out how you can help.
Show more Show less
License
Technical Information
More Information
Object Parts
Remixes Add your Remix
Show more
Interesting objects for you
Show more 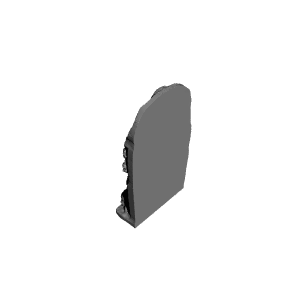