In this sculptural group (the other sculpture also available to download from Scan the World, see below) The Hindu Goddess Durga is here crushing the leader of the demons, Mahisha, who had defeated the gods in battle. The Gods were left to wander homelessly and this enraged the great Gods Brahma, Vishnu and Mahesh, who concentrated their powers to produce the Goddess Durga. The gods also handed each of their weapons to her (now missing from the sculpture), thus was born the Goddess as a beautiful woman for defeating Mahisha.

The Goddess is depicted with ten arms and with the severed limbs of demons around her waist. She is here depicted after having beheaded Mahisha, the buffalo demon (see other sculpture). Mahisha took many shapes to fight Durga and that finally of a buffalo, the symbol of death. Durga slays the neck of the buffalo and from its severed neck the Demon Mahisha can be seen emerging in Human form. Mahisha proceeds forth in an agitated form to attack Durga but is defeated by her because of the powers vested by the Great Gods. She holds him by the hair and pierces his heart with her weapons. As the Goddess Durga vanquished the demon Mahisha she is known as Mahisha-asura-mardini, the destroyer of the Buffalo-Demon.

Durga is a principal and popular form of Hindu goddess. She is the warrior goddess, whose mythology centers around combating evils and demonic forces that threaten peace and prosperity. She is the fierce form of the protective mother goddess, willing to unleash her anger against wrong, violence for liberation and destruction to empower creation. She carries the severed limbs of demons around her waist and is often portrays beheading the buffalo demon, Mahisha.

This sculpture also captures her in that scene, you can find the statue of Mahisha here: 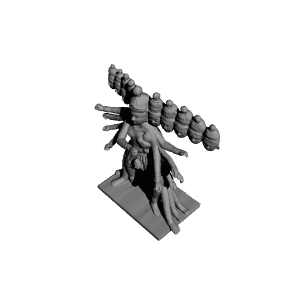