Gold weight in the form of a Human Male Head at The British Museum, London

3D
Scan The World
2,787 views 124 downloads
Community Prints Add your picture
Be the first to share a picture of this printed object
0 comments

Gold weight in the form of a Human Male Head at The British Museum, London

Lost wax cast figurative goldweight in brass, in the form of a human male head with tufts of hair. Hatch lines demarcate the eyebrows, eyeholes and the mouth which is shown open. Single hatch lines also decorate the edges of the head and face and cross marks (scarification?) are located on each cheek. Two protruding spikes emerge from either side of the mouth (the hilts of sepow knives?). There is a suspension loop at the top of the head and the underside is concave in shape and hollow.

The traditional practice of beheading men of high status on the battlefield and in captivity following conflict is recorded in historical accounts of the Gold Coast such as Bowdich 1819 and Dupuis 1824. Trophy heads were bound to the hilts of swords, to stools and other paraphernalia and displayed in public processions during the pre-colonial period (pre-1896). This weight may represent the head of chief Worosa or Adinkra both of whom died as a result of armed conflict with the Asante in the early ninteenth century. Sacrificial victims and criminals traditionally had small knives (sepow) inserted through the cheeks and lips prior to death to prevent them from speaking.

It should be big enough, otherwise hair will not be able to print well and also they will be brake when it is cleaning, Enjoy your print. 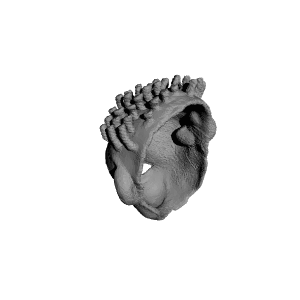 ×
0 collections where you can find Gold weight in the form of a Human Male Head at The British Museum, London by Scan The World