Gold weight in the form of a two standing male figures at The British Museum, London

3D
Scan The World
2,838 views 107 downloads
Community Prints Add your picture
Be the first to share a picture of this printed object
0 comments

Gold weight in the form of a two standing male figures at The British Museum, London

This lost wax cast figurative gold-weight, in brass, is in the form of two standing male figures with flexed knees facing each other. One man is holding his right hand to him mouth and his left arm is extended out from his side. The other holds both arms and hands in front of him. The figures stand on a flat plain rectangular-shaped base.

This weight may represent the meeting of the famous old men known throughout Asante as Amoako and Adu, two legendary friends who meet again after many years of separation, both having encountered misfortune and becoming very poor. In many castings one of them is depicted as carrying a bunch of keys, all he has left to show of former wealth (see Rattray, 1923,312) 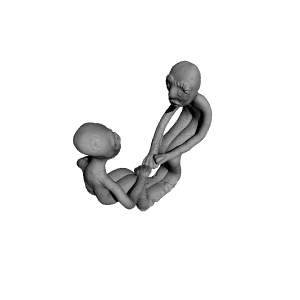 ×
0 collections where you can find Gold weight in the form of a two standing male figures at The British Museum, London by Scan The World