Gold weight in the form of an open-work Asante stool At The British Museum, London

3D
Scan The World
4,330 views 72 downloads
Community Prints Add your picture
Be the first to share a picture of this printed object
0 comments

Gold weight in the form of an open-work Asante stool At The British Museum, London

This is a lost wax cast figurative gold-weight, in brass, in the form of an open-work Asante stool (or dwa).

British Museum - curator's comments - proverbs associated with this weight include:

'When you go to someone else's house, and the owner is squatting there on the ground, you do not ask him for a stool'.
'The tsetse fly sits on the stool!'
'A stool is not a log that two people can sit on side by side'.

The Golden Stool (Ashanti-Twi: Sika 'dwa) is the royal and divine throne of the Ashanti people. According to legend, Okomfo Anokye, High Priest and one of the two chief founders of the Asante Confederacy, caused the stool to descend from the sky and land on the lap of the first Asante king, Osei Tutu. Such seats were traditionally symbolic of a chieftain's leadership, but the Golden Stool is believed to house the spirit of the Asante nation—living, dead and yet to be born.

Many wars have broken out over the ownership of the royal throne. In 1896, AsantehenePrempeh I was deported rather than risk losing both the war and the throne. In 1900, SirFrederick Hodgson, the Governor of the Gold Coast, demanded to be allowed to sit on the Golden Stool, and ordered that a search for it be conducted. This provoked an armed rebellion known as the War of the Golden Stool, which resulted in the annexation of Ashanti to the British Empire, but preserved the sanctity of the Golden Stool. In 1921, African road workers discovered the stool and stripped some of the gold ornaments. They were taken into protective custody by the British, before being tried according to local custom and sentenced to death. The British intervened and the group was instead banished. An assurance of non-interference with the stool was then given by the British and it was brought out of hiding.

In 1935 the stool was used in the ceremony to crown Osei Tutu Agyeman Prempeh II.

Need some supports for up part 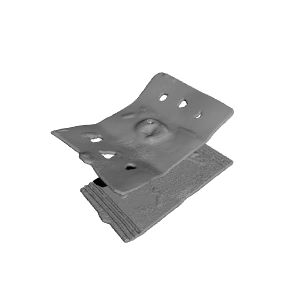 ×
0 collections where you can find Gold weight in the form of an open-work Asante stool At The British Museum, London by Scan The World