This is a homage to Scaramanga's gun from the classic 1974 film "The Man With The Golden Gun." It's is not movie accurate, but looks fantastic nonetheless.

Now it's time to take down Mr. Bond. Please note that the breech may be a little tight until it's had time to wear in. Slide it in and out a few times and it will become easier to move, but don't force it initially as it can become stuck. Please note that this is a replica only (not even that - it's an impression of a replica). It is not capable of firing nor can it be made or modified to fire. 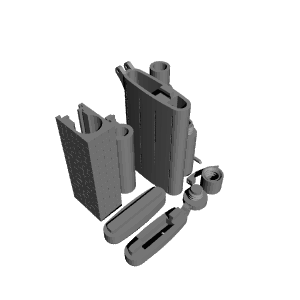 ×
26 collections where you can find Golden Gun by 3DKarma
×
Armin Huerland
@arhuerl
0
Printed on: Prusa I3 Geeetech
Material: PLA
Posted at: 03rd December 2021

I printed one as a present for a friend how is a big Bond fan. It's printed in gold colour PLA. Pictures doesn't do it justice.

This is a really pretty great model, but there are some scaling issues. The "pen" ends up being more the size of a highlighter than a nice fountain pen. I'm working on reworking what you have into something more screen accurate.