Christophe Charbonnel was born in Nantes in 1967 and he has been working with sculpture for 17 years.

His artistic career started as a cartoonist at the Walt Disney studios in Montreuil, but he has been fully commited to his sculpture practice since 2002, slowly expanding both in size and number of characters in his pieces. He chooses to portray ancient heros and mythology in general, this one in particular showing the giant Goliath.

The rough, realistic style shows a careful balance of strong profiles and expressions alongside smooth anatomy and lightness of shape, despite most of Christophe's work being cast in bronze. 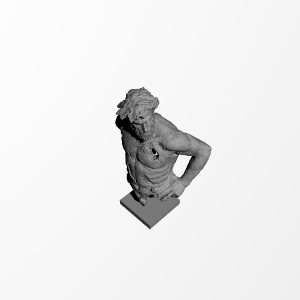 ×
5 collections where you can find Goliath II by Scan The World
×
PML 3D Prints
@PML3DPrints
4
Printed on: Anycubic i3 Mega
Material: PLA
Posted at: 19th October 2019

Took about 15.5 hours to print, infill was 20% and 2 mm. I printed him flat on his back so that no supports would be printed inside him and would remain hollow. Very pleased with this print! I did alter/remix the base on this to have a slight plaque at the front and a thicker base.