3D
3,437 views 80 downloads
1 collection
Community Prints Add your picture
Be the first to share a picture of this printed object
0 comments

Alessandro Giuseppe Antonio Anastasio Volta (18 February 1745 – 5 March 1827) was an Italian physicist and chemist credited with the invention of the first electrical battery, the Voltaic pile, which he invented in 1799 and the results of which he reported in 1800 in a two part letter to the President of the Royal Society. With this invention Volta proved that electricity could be generated chemically and debased the prevalent theory that electricity was generated solely by living beings. Volta's invention sparked a great amount of scientific excitement and led others to conduct similar experiments which eventually led to the development of the field of electrochemistry.

I had to do some changes in my design as some of the writing and details were so tiny they couldn't print properly. I also made some adjustments to make the design print support free!

0.2mm Layer height and 8% Infill should be good for this little office decoration. It took me 3 hours to make and only 33 grams of filament 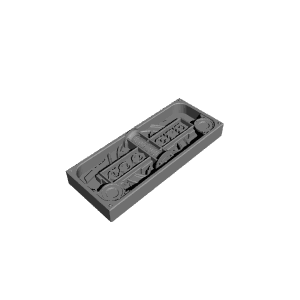