3D
Support Free Scan The World
2,341 views 156 downloads
2 collections
Community Prints Add your picture
Be the first to share a picture of this printed object
0 comments

This Vase has the kinrande style, which was popular in Japan; it`s decoration, with its combination of red and gold, echoes the qiangjin (gold etched) technique of laquer decoration which preceded it. Imari porcelain is the name for Japanese porcelain wares made in the town of Arita, in the former Hizen Province, northwestern Kyūshū. They were exported to Europe extensively from the port of Imari, Saga, between the second half of the 17th century and the first half of the 18th century. The Japanese as well as Europeans called them Imari. In Japanese, these porcelains are also known as Arita-yaki. Imari or Arita porcelain has been continuously produced up through the present day.Though there are many types of Imari, Westerners' conception of Imari in the popular sense is associated only with a type of Imari produced and exported in large quantity in mid-17th century. This type is called Kinrande. Kinrande Imari is colored porcelain with cobalt blue underglaze and red and gold overglaze. The color combination was not seen in China at that time. Traditional Ming dynasty color porcelain used dominantly red and green, probably due to scarcity of gold in China, whereas gold was abundant in Japan in those days. The subject matter of Imari is diverse, ranging from foliage and flowers to people, scenery and abstractions. Some Imari design structures such as kraak style were adopted from China, but most designs were uniquely Japanese owing to the rich Japanese tradition of paintings and costume design. The porcelain has a gritty texture on the bases, where it is not covered by glaze. There is also blue and white Imari. Kakiemon style Imari is another type of Imari, but it tends to be categorized separately in Europe.

Note: I rotated the images so the model appeared upright. The previews on the website do not show these changes. Perhaps someone with a mac could download them and reupload them as this may obey the rotation metadata. I printed this with 0% infill and 2 perimeters. 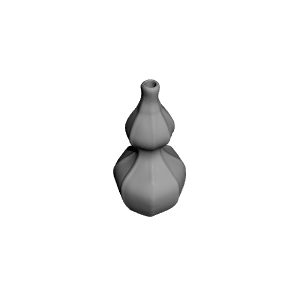 ×
2 collections where you can find Gourd Shaped Pottery Vase at The British Museum, London by Scan The World