3D
Scan The World
5,694 views 402 downloads
4 collections
Community Prints Add your picture
Be the first to share a picture of this printed object
0 comments

Ballet dancers are Degas’ most famous subject matter, and he was clearly fascinated by the endless variety of their poses. This engaging study of concentration is the culmination of a series of three that show one of the basic ballet steps. Degas began to model in wax and clay in earnest only after his eyesight began to deteriorate in the 1880s, but the resulting works were not exhibited, cast or widely known until after his death. This is one of 22 casts made posthumously from the cast of a wax model found in Degas’ studio.

Inscribed on the base, Degas. Foundry Mark on base: CIRE/PERDUE/AA HEBRARD 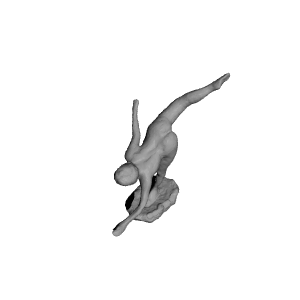 ×
4 collections where you can find Grande Arabesque, Second Time by 3DLirious