3D
Scan The World
1,243 views 79 downloads
1 collection
Community Prints Add your picture
Be the first to share a picture of this printed object
0 comments

This grave relief was found at Rhamnous, in Attica.

A mature, bearded man, leaning on his staff, and a young woman shake hands in silence, united after death. The outstanding beauty of the woman, with her fine features, willowy figure and elegant stance recall statues by Praxiteles. The relief belongs to a naiskos from the funerary enclosure of Hierokles. The pedimental crowning of the naiskos inscribed with the names of the dead, Hieron son of Hierokles, of Rhamnous and Lysippe, is at Rhamnous.

The base of the naiskos bears an epigram referring to Hieron and his four brothers who predeceased him. 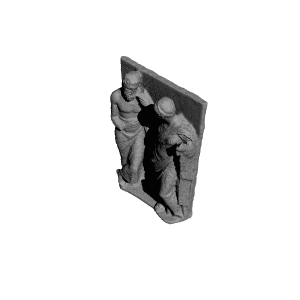