3D
Scan The World
3,076 views 385 downloads
1 collection
Community Prints Add your picture
Be the first to share a picture of this printed object
0 comments

Found near Larisis railway station, Athens. Two slabs joined together. At the right edge, a young Ethiopian groom attempts to restrain a large horse covered with a panther skin. He holds a whip in his raised right hand and the reins in his left. Above the back of the horse, there is an impression of the shape of a Macedonian helmet. The prominence is given to the horse suggests that the owner of the monument, which has the form of a naiskos, was a military man. The representation will have been completed by other figures, either in relief or carved in the round, possibly the warrior and his young servant carrying his equipment. The relief is thought to have belonged to a funerary monument and has been dated to the late 4th c. BC. However, according to another view, it is a Classicising work of the 1st c. BC, executed in honor of a ruler, possibly Mithridates, king of Pontos. 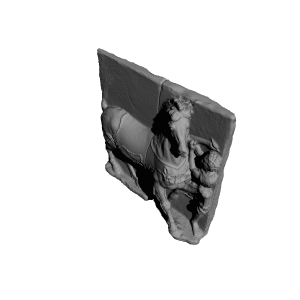