Grave Relief for a Victor

Grave Relief for a Victor

Halicarnass (Turkey), near Mausoleum, acquired in 1854
Marble, 2nd century BC

The palm branch as the sign of victory, the folded band in the right gand and the herm depicting Herakles from the waist up in a lion-skin, are all signs that the deceased was a successful athlete. Herakles was the patron deity of the palaestra. Herms depicting him as a thoughtful hero in old age typically adorned Greek gymnasia. 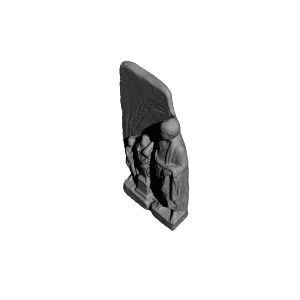 ×
0 collections where you can find Grave Relief for a Victor by Scan The World
×
Jon-Christopher Bulin
@WizardJon
0
Printed on: XYZprinting da Vinci Mini w
Material: PLA
Posted at: 15th February 2019

Made it for a friend, turned out great!