3D
Scan The World
1,242 views 50 downloads
Community Prints Add your picture
Be the first to share a picture of this printed object
0 comments

Found in the ancient cemetery of the Kerameikos, Athens. The right side of the relief has been restored with plaster. The stele is adorned by a loutrophoros between two lekythoi. Above the preserved lekythos at the left is an alabastron suspended from a ribbon. The lekythos bears a depiction of a nude youth playing with a hoop. On the belly of the loutrophoros an Athenian horseman holding spears bids farewell to his aged father; the young warrior's horse occupies the background, and there is a youth wearing a himation at the right edge. Above the representation is incised the name of the dead man: Panaitios of the deme of Hamazanteia. 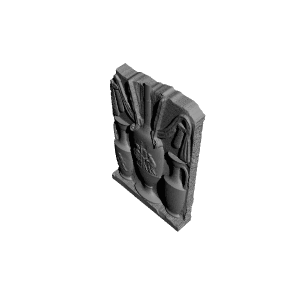