3D
Scan The World
1,059 views 54 downloads
Community Prints Add your picture
Be the first to share a picture of this printed object
0 comments

Found in the outskirts of Thebes. Two figures, a bearded man with a staffon the right and a spinning (?) woman on the left, sit facing each other. Three more figures, two men and a woman, stand in the background. A very small female attendand is represented at far left. Characteristic attributes are the pomegranate and torch (?) held by the standing bearded man in his left hand, as well as the aryballos in the right hand of the beardless youth. The solemnity of the relief, which is emphasized by the rhythmic arrangement of the magnificent figures in two levels, points to the heroization of the dead -a fact that accords with the Boeotian origin of the stele. 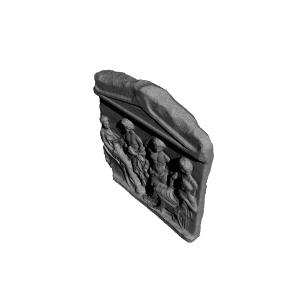