3D
Scan The World
1,281 views 63 downloads
Community Prints Add your picture
Be the first to share a picture of this printed object
0 comments

Grave stele made of Pentelic marble and found in the bed of the Ilissos river in Athens.

A nude youth leans against a pillar with his legs crossed. He holds a lagobolon (a stick to throw at hares) in his left hand, indicating that he was a hunter, as, too, does the dog sniffing the ground behind him. At the right side of the relief, the dead youth's aged father gazes at him, stricken with grief, leaning on his staff. Small holes at the side of and above the hair of the figures will have been used to attach metal wreaths. The representation in completed by the dead man's young servant who is half-asleep on the steps, exhausted by the painful loss. The rendering of the young man's body, which occupies the space with its monumental grandeur makes it likely that the figure was inspired by a free-standing statue of a hero.

This outstanding monument, originally in the form of a naiskos, has been attributed to the Parian sculptor, or to a sculptor from his school. About 340 BC. 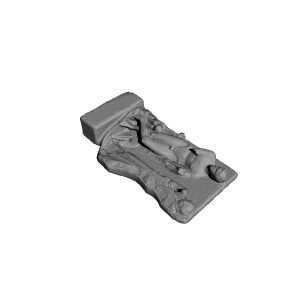