3D
Scan The World
2,009 views 64 downloads
Community Prints Add your picture
Be the first to share a picture of this printed object
0 comments

A cast of an original at Oronsay Priory, made for Murdoch MacDuffie of Colonsay, Argyll, died 1539. It features a gallery and a hunting scene. h.IB 141

Grave-slab, cast of an original at Finlaggan, mid-16th century. It shows Donald MacGill'easbuig in West Highland armour with a sword and a gallery. He was the crown tenant of Finlaggan. The graveslab implies his status as a mercenary leader in the wars in Ireland. H.1992-15 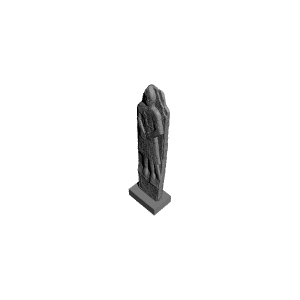 ×
0 collections where you can find Graveslab by Scan The World