3D
Scan The World
1,158 views 31 downloads
Community Prints Add your picture
Be the first to share a picture of this printed object
0 comments

The most lavish funerary monuments were erected in the sixth century B.C. by aristocratic families of Attica in private burial grounds along the roadside on the family estate or near Athens. Relief sculpture, statues, and tall stelai crowned by capitals, and finials marked many of these graves. Each funerary monument had an inscribed base with an epitaph, often in verse that memorialized the dead. A relief depicting a generalized image of the deceased sometimes evoked aspects of the person’s life, with the addition of a servant, possessions, dog, etc. On early reliefs, it is easy to identify the dead person; however, during the fourth century B.C., more and more family members were added to the scenes and often many names were inscribed, making it difficult to distinguish the deceased from the mourners. 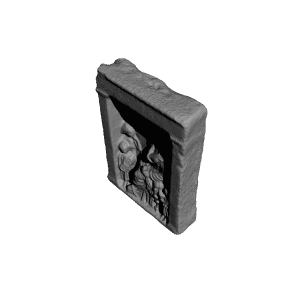 ×
0 collections where you can find Gravestone of Euphiletos' daughter, Gokousa by Scan The World