3D
Scan The World
1,276 views 33 downloads
Community Prints Add your picture
Be the first to share a picture of this printed object
0 comments

The epitaph reads: "Hekataios, son of Hekataios, fare thee well; who is the person that lies beneath this earth? o stranger, it is Hekataios, his father's namesake, who had not yet outgrown his ephebe garments, in whose heart lay wisdom and the thrill of beautiful victory in the contests, that sweet striving of the muses; he left behind the daylight in his eighteenth year; what a great pity it is, the life of humankind is in the hands of cruel Moira!".

In Greek mythology, the Moirai, often known in English as the Fates, were the white-robed incarnations of destiny. Their number became fixed at three: Clotho, Lachesis and Atropos. They controlled the mother thread of life of every mortal from birth to death. They were independent, at the helm of necessity, directed fate, and watched that the fate assigned to every being by eternal laws might take its course without obstruction. The gods and men had to submit to them. 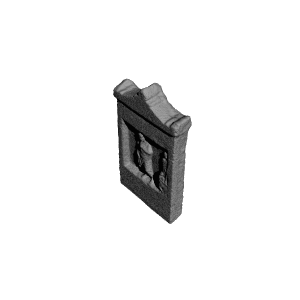