3D
Scan The World
1,554 views 60 downloads
Community Prints Add your picture
Be the first to share a picture of this printed object
0 comments

This is the tomb of the Modest Petrovich Mussorgsky, born the 21 March 1839 and died 28 March 1881. He was a Russian composer, one of the group known as "The Five". He was an innovator of Russian music in the romantic period. He strove to achieve a uniquely Russian musical identity, often in deliberate defiance of the established conventions of Western music.

Many of his works were inspired by Russian history, Russian folklore, and other nationalist themes. Such works include the opera Boris Godunov, the orchestral tone poem Night on Bald Mountain and the piano suite Pictures at an Exhibition.

For many years Mussorgsky's works were mainly known in versions revised or completed by other composers. Many of his most important compositions have posthumously come into their own in their original forms, and some of the original scores are now also available. 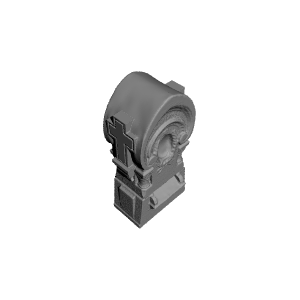