3D
Scan The World
2,578 views 78 downloads
Community Prints Add your picture
Be the first to share a picture of this printed object
0 comments

This public statue located in the Pincian Gardens, Italy is a marble bust of Gregorio Ugdulena. Born 20 April 1815, "Knight" and more commonly known as "strata Cavaleri". From an early age he proved to possess superior intelligence, having great outcomes in all courses of study, where at the age of 19 years he taught at the High School of Termini Imerese.  At 21 she graduated in theology and canon law at the University of Palermo, where, at age 28, he became a professor of Hebrew and scripture. Numismatist and archaeologist, he knew nine languages ​​including, perfectly, Hebrew, English, French , German and Spanish. His spirit deeply liberal, notwithstanding a constitutional monarchy, it ranks among the bravest people of Italian unification. Priest, immediately distinguished his pastoral and spiritual needs of the freedom that, in those days, did not go very well. In 1848 he took part in an insurrection and holds the posts of member of the General Committee and Vice Chairman of the Subcommittee on Justice, worship and internal public security. It was, therefore, MP in the House of Commons and Major Chaplain of the Kingdom (with rank Bishop).

With the Bourbon restoration, not having fled, he was granted house arrest in Termini Imerese and then exile in Mazara, Marsala and, therefore, at Favignana . In 1860, with the coming of Garibaldi, was a member of the Finance Committee and was Minister of Education in the Provisional Government of Sicily and Ministry of Religion. Member of the Italian Parliament, before the District of Marsala and then to Termini Imerese, in 1865 he was appointed Professor of greek Institute of Higher Studies in Florence and a member of the Higher Council of Education. From 1870 taught greek and Hebrew University in Rome. It was also Knight of Saints Maurice and Lazarus and Member of the Academy of Science and Letters of Palermo. Among his major works The Sacred Scripture in the vernacular found again with the originals and illustrated with brief commentary and study of coins Punic-Sicilian. He died in Rome on June 2, 1872, a bit 'in the shade because, as free spirit which had remained, had never "trooped" indeed had made ​​speeches in Parliament not acceptable to' one and the other side of the Tiber. Quintino Sella, commemorandolo the House, called him a leading figure in Italian science.

Printed for PRINT3Dforum.com Just add some support to the neck area and that will be fine. 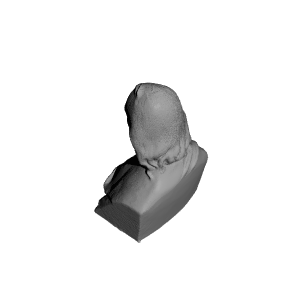 ×
0 collections where you can find Gregorio Ugdulena at The Borghese Garden, Italy by Scan The World