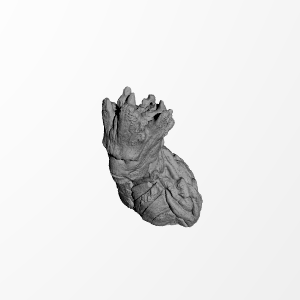 Can't say thank you enough! Extremely happy with this model and how it printed on my Ender 3 Pro. Printed in about 13 hours. Spray painted in flat black enamel then lightly hand painted with a small short bristled brush taking care not to use too much paint. You want the black to show through in all cracks to give dimension. Still need to paint the eyes though. I printed two of these using ProPLA from 3DFuels website. Super happy with their quality. Sliced with Ultimaker Cura. I did used different slicer settings than what you listed. My settings were as follows: Layer Height=0.16mm, Infill Density=25%, Printing Temperature=216c, BuildPlate Temp= 58c, Print Speed=50mm/s with initial layer speed at 20mm/s, Combing Mode= Within Infill, Retraction Enabled, Support Placement= Touching Buildplate, BuildPlate Adhesion Type= Skirt --------------THANK YOU!!!!!!