Group of Polyphemus and a Greek

3D
Scan The World
3,356 views 218 downloads
2 collections
Community Prints Add your picture
Be the first to share a picture of this printed object
0 comments

Group of Polyphemus and a Greek

Polyphemus Group, with a Greek at his feet, in the act of offering him a cup of wine. The Cyclope is seated on a rocky spur, the head is slightly faced on its right. A right-handed skeleton on the right thigh, and holds its right foot above the legs of the Greek character, which is smaller in size lay at his feet. It is possible that the work was part of a composite group, perhaps a decoration of a nymph.
The Greek head is ancient but not relevant; Crowned with pampini, was rather related to the head of a character of a bacchanal procession 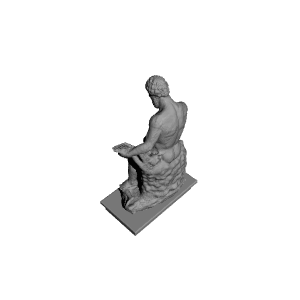