3D
Scan The World
4,480 views 303 downloads
3 collections
Community Prints Add your picture
Be the first to share a picture of this printed object
0 comments

One of a pair, this fierce guardian lion bares his fangs, crouches, and grips the platform underneath him with splayed claws. Pairs of stone lions have been found protecting Han-dynasty tombs (206 B.C.–220 A.D.) and they became more prevalent following the inclusion of lion iconography in Buddhist cave temples in northern China during the fifth and sixth centuries. Excavations of Northern Qi tombs have unearthed pairs of protective lions defending the entrance to the innermost chamber containing the coffin.

This guardian lion's fully modeled body and rippling muscles is illustrative of Northern Qi sculpture, which was more rounded and naturalistic than the elongated and linear forms of the preceding Northern Wei (386–534) and Eastern Wei (534–550) dynasties. The stylized whorl pattern along the lion's shoulders is common on carvings in relief as well as sculptures in the round from this period. While the Northern Qi dynasty was brief and was supplanted by the Northern Zhou in 577, its sculptural achievements provided direction and inspiration for stone sculpture in the succeeding centuries when China was unified first under the Sui dynasty (581–618) and then under the Tang dynasty (618–906) 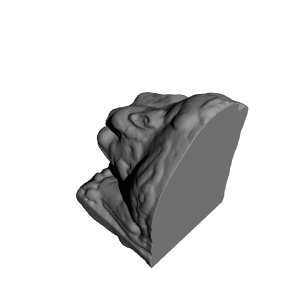 ×
3 collections where you can find Guardian Lion, Northern Qi Dynasty, at the Metropolitan Museum of Art, New York by Scan The World