3D
Scan The World
1,758 views 86 downloads
Community Prints Add your picture
Be the first to share a picture of this printed object
0 comments

The gui was the primary food vessel used in ceremonial rituals for offerings of grain. One of the most important components of the ritual paraphernalia, it was often coupled with the ding (another food vessel). The form was produced as early as the Anyang period of the Shang dynasty (c. 1300–1046 BCE) and developed into many varieties. This vessel, with its wide mouth, ample, bowl-shaped body, and C-shaped handles represents the typical gui of the Western Zhou. The flange forms the center of a taotie animal mask. The handles are topped by horned animal heads, and bird wings are carved in flat-band relief on the bow, thus giving the animal head a bird’s body. 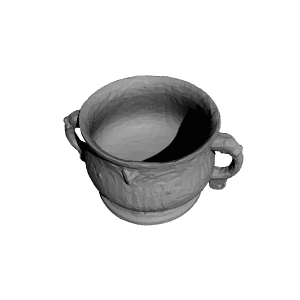 ×
0 collections where you can find Gui food vessel by artsMIA