3D
Scan The World
1,790 views 111 downloads
Community Prints Add your picture
Be the first to share a picture of this printed object
0 comments

The Roman emperor Hadrian ruled from 117 to 138 AD. We know this is a sculpture of Hadrian from his beard and facial features. This sculpture was made in the 17th century and was inspired by the original.

Known as the Emperor of culture than war, Hadrian governed with stability and avoided war, contentrating his energy to the improvement of the administration of the Roman Empire and discipline in the army. He abandoned the east territories of Armenia and Mesopotapia which his predecessor Trajan had conquered and restricted the Empire to the frontier of the Euphrates river. He visited his territories extensively and personally inspected the army. A result of his visit to Britain was the Hadrian Wall. He is famous for building the Pantheon in Rome and the Imperial Villa at Tivoli. 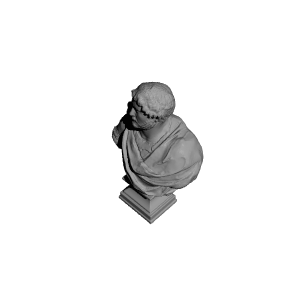