3D
360°
Scan The World
1,672 views 169 downloads
1 collection
Community Prints Add your picture
Be the first to share a picture of this printed object
0 comments

Hadrian (76–138) was Roman emperor from 117 to 138. He energetically pursued his own Imperial ideals and personal interests, primarily visiting almost every province of the Empire, accompanied by an Imperial retinue of specialists and administrators. He encouraged military preparedness and discipline, and he fostered, designed, or personally subsidised various civil and religious institutions and building projects. He was an ardent admirer of Greece and sought to make Athens the cultural capital of the Empire, so he ordered the construction of many opulent temples there. His intense relationship with Greek youth Antinous and Antinous' untimely death led Hadrian to establish a widespread cult late in his reign.

In this bust, the emperor's portrait is set in a bust with chlamys (cloak). 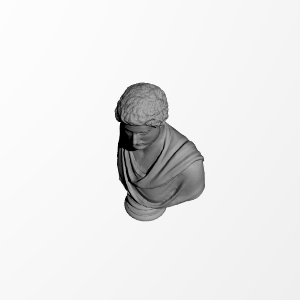 ×
1 collections where you can find Hadrian by Scan The World